Celebrating the life of Edie Yates 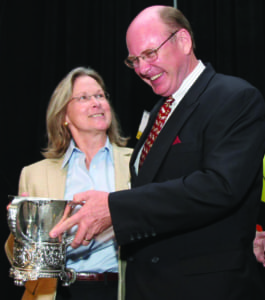 Edie Yates, 2002 United Way of Central Florida board chair and former Lakeland city commissioner, was a powerful force for good in our community.

United Way and the entire Lakeland community were shocked and saddened to learn of the tragic loss of Edie and her husband, David Henderson,  on Tuesday. But we remember all she did to improve lives and strengthen our community.

“Edie Yates was known and respected for diversity, equity and inclusion work,” said UWCF President & CEO Christina Criser Jackson. “She fought for women’s rights in leadership roles throughout the community.”

In addition to being a member of the Leadership Giving Association and on the UWCF Board of Directors for years, Edie was a long time Community Investment Team volunteer.

She and other CIT volunteers take valuable time away from their work to help hold the services UWCF funds accountable and only fund the programs that have the best return on investment for our donors.

In 2004, Edie was instrumental in the creation of EMERGE Lakeland, a networking organization of dedicated and talented young professionals in Lakeland. The program was created by a partnership between UWCF and the Lakeland Chamber of Commerce.

Edie and her first late husband, Steve Baylis, also created EMERGE Serves, Endeavor Serves and Engage Serves to train the next generation of philanthropic volunteers in the Lakeland, Winter Haven and Bartow areas.

As a Certified Public Accountant, former treasurer on the UWCF board of directors and a volunteer on the finance committee, Edie worked closely with CFO Jill Martin.

“Her expertise in nonprofit accounting was very valuable to UWCF as we encountered more complex issues over the years,” Jill said. “If I had a complex issue to discuss, Edie was at the table as part of the Finance Committee, even after her tenure on the Board ended.”

At UWCF’s 2006 Annual Meeting, Tip Fowler presented Edie with the organization’s then highest honor, the George W. Jenkins Volunteer of the Year award.

“While her chosen field of accounting is filled with lots of black and white, she always brought a warm hue to any meeting, project or undertaking that she was involved in,” said UWCF Board Member Tip Fowler. “I will miss her as will the whole community. I hope that the widespread, sincere feelings of community sympathy will be comforting to the families affected.”

Many current and former United Way staff and volunteers have expressed their shock and are heartbroken by the news. Edie’s intellect, honesty and strength of character earned her the respect and affection of everyone that worked with her. Her determination to improve the quality of life for everyone will be felt forever.

Everyone Deserves to Thrive–Not Just Survive