United Way of Central Florida awards Philanthropist of the Year, Citizen of the Year, Volunteer of the Year and more at 2019 Annual Meeting.

United Way of Central Florida celebrated the campaign contributions for the year and honored community leaders, volunteers, supporters and staff during its Annual Meeting on the evening of April 16, 2019 at the RP Funding Center.

Christina Criser Jackson, UWCF President & CEO, along with Don Selvage, UWCF Board Chair, and board members presented awards to individuals who have gone above and beyond to improve community conditions in Central Florida.

In addition to highlighting accomplishments during the campaign year, the focus of the meeting was on the opportunities in the coming year. As United Way of Central Florida’s new President and CEO, Christina is proud of the successes over the last year and very passionate about growing awareness of all that United Way of Central Florida provides for residents of our tri-county area. 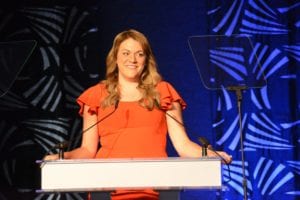 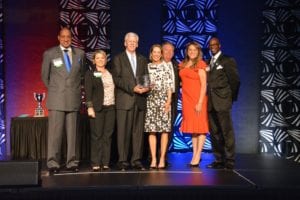 While celebrating the past, Christina emphasized, “It’s a new day and as we look to the future, the vision of United Way of Central Florida is dedicated to continually increasing community impact, leadership, relationship management, awareness, diversity, communication, volunteerism, and governance throughout Polk, Highlands, and Hardee Counties. Our volunteers, funded partners and staff have prepared themselves fully for this next step and we hope you will be a part of that process. I ask you all to imagine how you will LIVE UNITED.”

The Philanthropist of the Year award was created to thank the winner for a lifetime commitment of Philanthropy to United Way and our community.

Ed Crenshaw currently serves as a Trustee of Florida Southern College in Lakeland, chairs the Barnett School Advisory Board, and is an honorary Board Member of the Food Marketing Institute.

Denise Crenshaw is also dedicated to serving, having volunteered with Lakeland Regional Hospital Foundation and Peace River. She also serves on the board for Guardian ad Litem, which is composed of volunteers who speak on behalf of abused and neglected children in the court system. 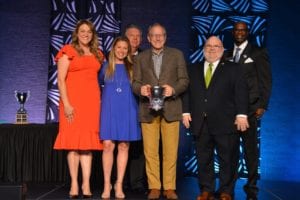 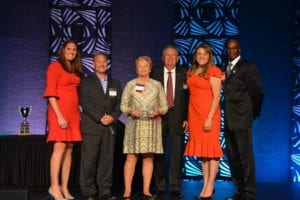 The George W. Jenkins Volunteer of the Year award goes to a United Way of Central Florida board member or former board member whose volunteer experience is in a variety of leadership roles and assignments. Bill Mutz is not only Lakeland’s mayor, he has served in the past as Campaign Chair, Democratie Society Committee Member, New Business Committee member, and various other UWCF committees. He is a Board of Trustee and member of the executive committee for Southeastern University. He also has served in the capacity of President and/or Chairman for 16 other boards.

The Citizen of the Year award goes to a citizen in the community that has gone above and beyond. Shirley Balogh has served as a member of the UWCF Strategic Planning Committee and was a campaign volunteer. For over 37 years, Balogh served as President & CEO of Alliance for Independence, providing specialized training to developmentally disabled adults, allowing them to experience personal growth and achievement through awareness, education, community resources and personal relationships. She has been involved with the Kiwanis Club for years and, most recently, Balogh came out of retirement to become the Interim President & CEO of UWCF. 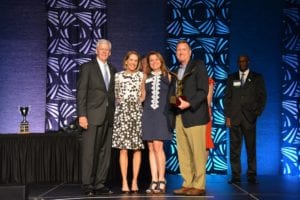 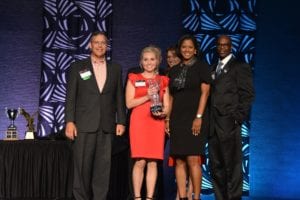 The Spirit of Central Florida award acknowledges a company that has surpassed all expectations and exemplifies the giving spirit of this community. Not only did Bank of Central Florida have an increase of 8.5% in contributions; they had 98.3% participation with an average gift amount of $723.51; per capita amount of $711.25, which was an 8% increase over last year. President and CEO Paul Noris even co-chaired UWCF’s 2017-2018 campaign alongside his wife, Lynn Noris.

The Employee Coordinator of the Year is chosen based not only on their enthusiasm and passion about United Way of Central Florida, but because they have coordinated some of the best events in the workplace campaign. Kaelin Cundiff of GEICO championed a campaign of over $664,000 to United Way of Central Florida. This is the most that the Lakeland Division of GEICO has ever contributed and is a 26% increase over last year’s efforts.