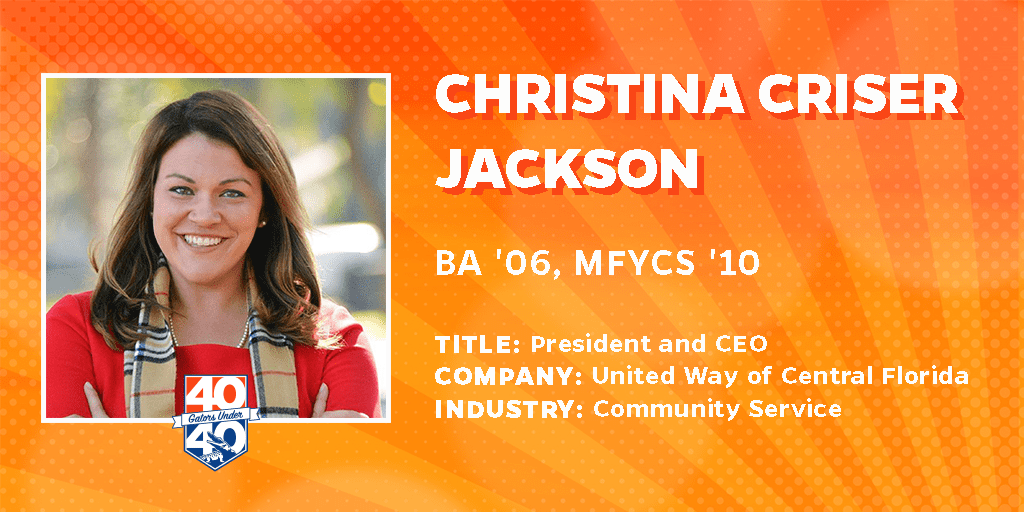 GAINESVILLE, FLA. | United Way of Central Florida President and CEO Christina Criser Jackson is one of a select group of University of Florida alumni named to this year’s prestigious “40 Gators Under 40.”

The annual awards program was established in 2006 to recognize alumni under the age of 40 whose achievements positively reflect The Gator Nation. Criteria for the competitive award include making a significant impact on the candidate’s industry and having civic or professional accomplishments at the state, national or international level.

“The word outstanding barely describes the alumni in this year’s ’40 Gators Under 40’ class. These young men and women are absolutely remarkable and have already made a significant impact in their professions and communities,” said Matt Hodge, executive director of the UF Alumni Association. “Collectively, they’re a wonderful reflection on The Gator Nation® and its potential to change the world.”

The Outstanding Young Alumni Award recognizes graduates from all UF’s 16 colleges. This year’s honorees range from doctors and pharmacists to entrepreneurs and artists. Past award winners include meteorologist Stephanie Abrams, politician Adam Putnam and sportscaster and television personality Erin Andrews.

Criser Jackson has dedicated her life to nonprofit work and has a master’s degree in family, youth and community sciences. Starting her career at United Way Worldwide, Christina has served the Central Florida community for over a decade. She is a member of the Junior League of Greater Lakeland and the Association of Fundraising Professionals Florida Caucus. Criser Jackson is also a graduate of the UWW Advanced Leadership Program.

The 167-year-old University of Florida has more than 425,000 living alumni residing in every U.S. state and in more than 150 countries. The university has a long history of established programs in international education, research and service, and is one of only 17 public, land-grant universities in the prestigious Association of American Universities. It is ranked No. 8 in the most recent U.S. News and World Report’s list of public universities. The UF Alumni Association is responsible for a network of nearly 100 Gator Clubs, is actively involved with the recruitment of superior students, and hosts outreach and on-campus programs to connect alumni with their alma mater. To learn more, visit ufalumni.ufl.edu.