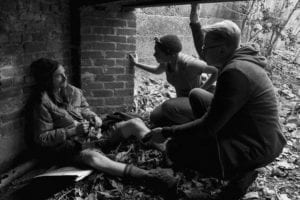 Allan was 18 years old and just graduated from high school when he and his parents had a falling out that ended with the intelligent young artist running away to live on the streets.

Seven years of homelessness and drug addiction took its toll on Allan, but all of the goals he set for himself when he were younger was just faded memories.

Bouncing between homeless camps and emergency shelters, Allan found he was filled with shame, guilt and a longing to reconnect with his parents.

After eight months of altering between living at Talbot House Ministries’ Emergency Shelter, a United Way of Central Florida service, and sleeping on the street, Allan decided he could not continue to live this way. He no longer wanted to be a victim of his own choices and was motivated to change.

So Allan applied to Talbot House’s Renewal program and received counseling for his mental health and addiction and attended classes to help foster independence.

Allan saw firsthand how UWCF and Talbot House were able to help those in his situation and remained hopeful that he could end his self-destructive lifestyle and get out of homelessness.

Impressively, Allan is four months sober. He has a safe place to sleep, nutritious meals and is receiving treatment for his asthma.

Allan plans to return to school and get a degree in education, looking to have an apartment of his own after completing the program and is working hard to rebuild his relationship with his parents.

$120,000 in Grants Awarded to Local Nonprofits for Community Partnership Sc...
Scroll to top
By continuing to browse the site you are agreeing to our use of cookies