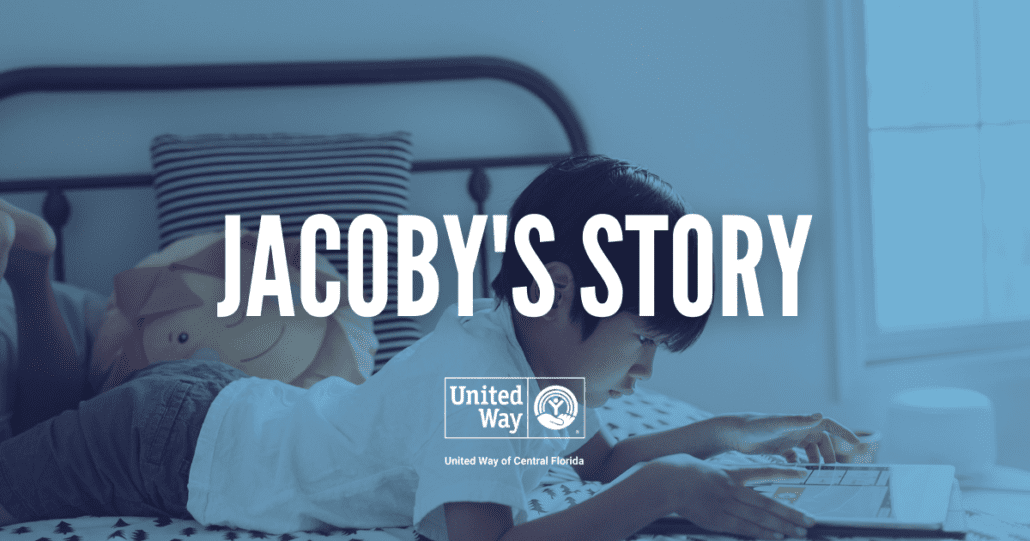 Tiffany Cribb’s home was covered in labels. Everything from the furniture to appliances was clearly marked. But the obsession with labeling wasn’t a strange quirk of hers.

Tiffany’s 17-month-old son, Jacoby, was falling behind in language, literacy and speech development. So Tiffany decided to seek help and enroll her son in Early Learning Coalition Polk’s School Readiness program at FutureCare Learning Center in Auburndale, a program funded by United Way of Central Florida.

Jobe Ream is the owner and director of FutureCare and said Tiffany is a wonderful parent to work with.

“She is constantly working with her kids,” Jobe said. “She does everything to the teach them, but she does it as a game and she keeps them entertained and excited about learning.”

There was constant communication between center staff and Tiffany about Jacoby’s progress. Teachers were pulling Jacoby aside for one-on-one language and literacy games everyday and involving Tiffany in the process.

“She even labeled the entire house,” Jobe said.

FutureCare staff saw measurable improvements with not only his language skills, but his social, emotional and cognitive development.

Jobe and her team are ninjas when it comes to teaching. She said a strategy they use is letting a child choose where they want to play and incorporating learning games around their chosen activity.

“Jacoby would always choose to play in our blocks center,” Jobe said. “We’d get on his level and discuss how to construct and build; referring to the books we placed in every learning center in our classroom along the way.

“It didn’t matter what center he wanted, we would bring the learning to Jacoby in different forms and incorporate his interests,” she said.

“It takes me a minute to think of everything we went through and where he was verses where he is now,” Jobe said.

And while Jobe said she and her staff helped Jacoby as much as they could, it was Tiffany who made the real difference.

“I think part of it was our teachers, but I don’t think he would be where he is without his mother,” Jobe said.

Build United Resumes!
Scroll to top
By continuing to browse the site you are agreeing to our use of cookies