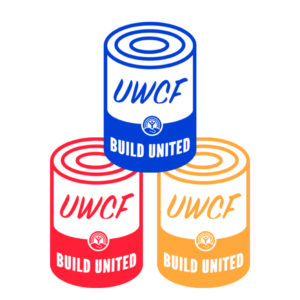 Build United, a food drive with a twist, is designed to bring attention to the food hardships faced by many residents in Polk, Hardee and Highlands counties through an interactive contest. Competitors are challenged to build creative structures with non-perishable foods.

“The contest culminates on April 24 after a public Facebook vote on the most creative construction,” Turner said. “Then all the food used for the competition will be donated to local food banks and pantries.”

A panel of local judges will also visit the can good constructions and their votes will be combined with votes from Facebook to determine a winner.

Registration is open now until noon on March 12 and the deadline to complete structures is April 12. Facebook voting will take place on UWCF’s Facebook page from April 13 to April 23 with the winner to be announced on April 24. Participants must have their constructions taken down to distribute the food to a food pantry by April 27.

Build United was originally set to start last year but the destruction of Hurricane Irma caused the project to be delayed for four months. The late start allowed UWCF to focus on getting food for families affected by the storm immediately.

Build United was announced by Turner at last years Campaign Kickoff. Local businesses and organizations are encouraged to form teams and register for the event by Feb. 12.

Ep. 14 – A Conversation with Mayor Bill Mutz
Scroll to top
By continuing to browse the site you are agreeing to our use of cookies