Kimberly Elmhorst: 2020 Volunteer of the Year 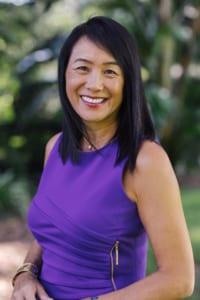 While Elmhorst admittedly doesn’t foresee an Emmy or Peabody in her future, she is making waves her own way and using her voice, just like Chung, to make a difference.

This past June, United Way of Central Florida celebrated its inaugural Spirit Week, a celebration of the past year’s accomplishments. The week-long event served as a replacement for the UWCF’s Annual Meeting, which was canceled because of the COVID-19 pandemic.

Elmhorst is a UWCF board member, 2015 UWCF campaign chair, former Loaned Executive, a member of Women United, past president of Junior League of Greater Lakeland and is on the boards for Bonnet Springs Park, GiveWell Community Foundation and Lakeland Vision.

“Her strong sense of justice and desire to meet the needs of the disadvantaged propel her daily choices,” Mutz said. “She epitomizes the George W. Jenkins Award winner.”

Elmhorst said the legacy of the award motivates her to continue the work she does to improve her community.

“It’s shocking and surprising. When I look at the names of the people who previously won and of course, who the award is named after — it inspires me more,” she said.

Brittany Sale, a member of the UWCF Board of Directors and Marketing Committee, has known Elmhorst for 20 years and said she is the right choice for Volunteer of the Year.

“You will always be able to rely on her,” Sale said. “If she says she’s going to do something, you can consider it done. And I love how she is a bold leader.”

Sale said Elmhorst’s knowledge of issues and resources, combined with her experience working with so many nonprofit organizations, makes her uniquely suited to foster new partnerships that benefit the entire community.

“I think she has a real understanding of, not just what the needs are, but also what the assets in the community happen to be,” Sale said. “She’s so good at connecting different groups and, because people want to work with her, she’s able to pull those groups together. That’s important in Polk County.”

Elmhorst’s involvement with United Way began about 20 years ago when she worked as a Loaned Executive, assisting the UWCF team with that year’s campaign. She said that experience exposed her and her husband, Kurt, to United Way’s mission for the first time. It led her to get more involved.

“The magic behind those kinds of contributions is so different than what is obligatorily signed over to the government,” Madden said. “I know we have to pay our taxes and it does great things, but money given from your heart to organizations like United Way causes our cities to blossom.”

While Madden and Elmhorst first met while attending Lakeland High School, the two became friends after joining the Junior League of Greater Lakeland. That experience was one of the first times Elmhorst realized the amount of good she could do for her community.

“When I was at Florida Southern, it really enabled me to see that I could take on leadership positions. But what really showed me what was out there and what I could do as a person was Junior League,” Elmhorst said.

And Elmhorst’s leadership skills in 2015 when she was asked to be the UWCF campaign chair to help organize and lead the organization’s fundraising efforts.

“When Penny Borgia calls you out of the blue to have lunch, the last thing you think is she’s going to ask you is to be Campaign Chair,” Elmhorst said. “I was shocked that she asked but excited for the challenge.

That year, the campaign received more than $9.1 million, the highest total for UWCF at the time. But Elmhorst is still hesitant to take the credit.

“It takes a village,” she said. “It wasn’t me, it was the amazing staff, volunteers and campaign cabinet.”

Recently, Elmhorst has been hard at work as the president of Friends of Bonnet Springs Park, as well as serving on the park’s board of directors.

Elmhorst was first asked to be a part an advisory committee and said she had no idea her role would expand to being on the board and creating the Friends of Bonnet Springs Park group, which has grown to over 600 member households.

UWCF President and CEO Christina Criser Jackson said she was thrilled to learn the past five Volunteer of the Year award winners chose Elmhorst as the next recipient because of her passion and dedication to improving our Central Florida community.

But despite the years of experience, the number of services she has helped provide her community and the public recognition she receives, Elmhorst said she still sees herself as a stay-at-home mom.

“I left Florida Southern when my daughter was born — she’ll be 21 in February — to be a stay-at-home mom,” she said.

“The fact that people have allowed me, even without the professional credentials, to be involved on different boards is surprising to me,” Elmhorst said. “I enjoy everything that I’ve learned and I feel like I have learned a lot, it just hasn’t been in a professional office setting.

“The stay-at-home mom can make a difference.”

This profile was featured in United Way of Central Florida’s 2020 Impact Report.